"A Cosmic Call" is the fifty-third episode of the anime series, Sonic X. It first aired on 12 March 2005 and 10 September 2005 in France and the United States respectively.

The episode starts in space with a flash of yellow light followed by explosions. There are dozens of robots destroyed by Super Sonic who appears to be rather exhausted. The leader of the robots, Dark Oak, appears and draws his sword. As Sonic clashes with Dark Oak there is a large explosion and Sonic is thrown back. Dark Oak demands that Sonic give up the Chaos Emeralds. Sonic summons the emeralds and uses Chaos Control to scatter them throughout the galaxy. Without the emeralds, Sonic falls down to his home planet. Ignoring his slightly damaged armor, Dark Oak departs away from the planet and orders his troops to search for the Chaos Emeralds. He then sends one robot to the planet below to take the Planet Egg. Meanwhile, Sonic reverts back to normal as he falls from the sky.

Meanwhile Tails, Amy and Cream have set up on top of a hill to watch a meteor shower that is going to happen later that night. Cream suggests that whoever counts the most wins the game. Amy wonders where Sonic is, but Tails says he is probably on one of his adventures. Amy wishes Sonic was there with them and Cream explains the concept of making a wish under a meteor shower. Amy remembers Chris taught them that and Tails comments that Chris' customs are weird, Cream wonders what they are doing now.

Just then the stars start falling and the three of them spot one that is falling strangely. It barely misses them and crashes a few yards away. The three of them go to explore and find an unconscious plant-like female alien girl on the ground next to a crashed spaceship. The group decided to escort her to Cream's house.

At Eggman's base, Sonic is resting on a bed as he wakes up there, somewhat banged up. Eggman greets him and says they found him lying on the beach unconscious. He remembers him and Bokkun jogging and they found Sonic and Eggman brought him back because he didn't want anyone finding Sonic almost dead near his base. Bocoe and Decoe step up and say how honorable it is to care for one's enemy. Bokkun appears with some hot chocolate and asks if Sonic wants some. However, Sonic says no and accidentally spills it on Bokkun. As he speeds away the three robots yell at Sonic saying next time they will finish Sonic. Rouge has listened to the whole thing.

Back at Cream's house the young girl is dreaming about herself running through a hallway as explosions rip through. She sees one of the robots Sonic destroyed and hears a voice saying "Cosmo run away!". Cosmo wants to see everyone around her. Cream tells her to lay back and rest. However, Amy starts in with the questions and Cream tells her not to rush. Cream asks for her name, but Cosmo says she cannot tell it just yet as she has come to see Sonic with an important message. Amy says Sonic is very hard to find and thinking that the girl is after Sonic. Amy then butts in and starts telling her that she is Sonic's girlfriend. Cream tells her to calm down and Tails explains she is lucky because they are Sonic's friends. They introduce themselves to Cosmo. Tails invites her to stay with them until Sonic gets back someday, but the girl says that it will be too late by then.

Just then they hear a noise outside and look out the window to see another robot coming down. Cosmo has gotten up and sees that it is a Metarex. On Angel Island, Knuckles is sleeping by the Master Emerald and as he wakes up he sees the Metarex landing as it begins to destroy the forest. Not wanting the forest to be destroyed Knuckles goes into action trying to fight the robot, however his punch does nothing and he is knocked back. Some missiles from Tails' new X-Tornado also have no effect on it. Inside is just Tails and Cosmo. Knuckles gets Tails to cover him as they continue to try and stop the robot. Amy and Cream run in and watch the destruction; Amy has her suspicions with just Tails alone in the cockpit with Cosmo. Tails sees that their attacks are useless and Cosmo tells Tails about the robots. Just then Sonic appears and attacks the robot knocking it down. Cosmo jumps at sight of Sonic and hits her head, she is okay. The robot quickly gets up as Sonic goes after the robot.

In Earth, a grown-up Chris working on a computer in the same room as before. After some adjustments he has located Sonic's world and stands at the gateway looking at his work in the past six years. He then looks at a photo of him, Sonic, Tails, and Amy but the wind caused it to fall, shattering the glass.

Back on Sonic's world Tails releases a Ring. However even that is not enough for Sonic to stop the robot. Knuckles joins back in again and is knocked away landing next to Sonic. The two of them get up and go after the robots. Tails wonders why Sonic is running so slow. The robot begins its assault as Tails tries to damage it with his missiles again. Knuckles suggested Sonic to use the emeralds, but Sonic does not have them anymore, replying he was forced to scatter them away to get the Metarex that attacked him to go away. Knuckles berates at Sonic angrily while Sonic simply responds that they will have to find them all over again. A claw comes for Amy and Cream and they dive down.

Just then a blue light emits from the ground as it breaks apart a small crystal with a galaxy inside it rises up from the ground. Knuckles wonders what it is, as the X-Tornado flies overhead. Cosmo explains that the crystal is a Planet Egg and without it, all life in the planet will slowly die. The robot grabs the crystal and begins to leave. Sonic tries to stop the robot but is knocked down with Knuckles grabbing him. Tails gives chase, however the X-Tornado cannot keep up and he is forced to back down.

Cosmo wants out of the X-Tornado right away Tails says it is dangerous to open it now. But he does anyway and Cosmo jumps out, floating gently to the ground. The others on the ground look around and Knuckles wonders who has hurt Sonic so badly. Sonic says it is nothing serious as Cosmo lands on the ground. She introduces herself to everyone and gives the message that he must save the universe. Sonic wonders how he is going to do that.

Tails lands on Angel Island and notices the Master Emerald glowing; he then informs everyone about this. Back in his lab, Chris is recalling a note that he left for everyone saying that he is leaving by himself into Sonic's world for some time although he promises to return someday. He steps through the gate and the Master Emerald starts to glow. An image appears inside it and Chris calls out. Everyone sees that it is Chris but as he approaches he falls down to the ground and sees that somehow his physical self has been regressed back into his child-like appearance six years ago and exclaims in surprise. 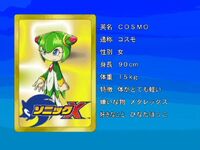 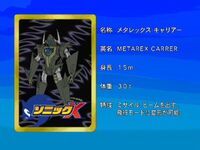