"A Chilling Discovery" is fifty-seventh episode of the anime series, Sonic X. It first aired on 15 March 2005 and 8 October 2005 in France and the United States respectively.

Everybody has to fight the Metarex before reaching an ice palace, where the emerald is supposed to be located. Sonic's group find it, but it is sealed in a solid ice block. A more powerful Metarex appears, the Metarex Crystal, which takes power from the emerald to become even stronger. A fight engages and Cosmo finds the way to defeat it with a laser beam. The laser from the Blue Typhoon defeats the Metarex Crystal. The Planet Egg gets trashed into the planet and the snow disappears. Knuckles finds the Chaos Emerald but before he gets it, Rouge steals it. However, Tails discovers that the Emerald was a fake the Metarex used to throw them off track (with Knuckles commenting on how Rouge will react when she finds out about the phony Emerald). Rouge soon discovers the Emerald is not real and it crumbles in her hand and she becomes angry. 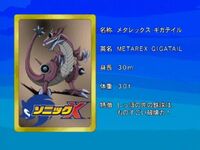 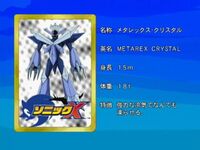