Transportation through land, air and sea

AGES is a character that appears in Sonic & All-Stars Racing Transformed, representing both the game and Sega as a whole. It speaks in various soundbites from Daytona USA, Sega consoles and After Burner Climax.

AGES is a Dreamcast VMU (Visual Memory Unit) which can literally transform into trademarks of Sega's past. It starts most races off as a Hornet Stock Car from Daytona USA, then when it hits water, it transforms into a Dreamcast controller. When it flies off into the air, it becomes an F-14 Tomcat from After Burner. Its home track is Race of AGES. 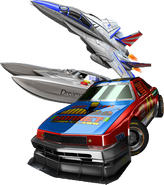