A power-up that can either be an Item Box with the icon of a Ring on it or a single Ring with the number "20" within.

The 20 Rings[1] (20リング[2], 20 Ringu?, lit. "20 Ring"), also referred to as the Super Ring[3] (スペシャルリング[4], Supesharu Ringu?, lit. "Special Ring"), is a power-up that appears in the Sonic the Hedgehog series. When the player obtains this power-up, twenty Rings will be granted to the playable character at once. It can be considered a variant of the Super Ring.

Since its debut, the 20 Rings has been featured as both a power-up contained in different objects and as an independent, non-contained, and collectible item as well. Regardless of how it has appeared though, the 20 Rings has functioned identically in nearly every game.

The 20 Rings follows the same principles as the Super Ring. When obtaining a 20 Rings, the player is instantly granted twenty Rings at once which are automatically added to the player's total Ring count. Rings granted by 20 Rings function like regular Rings, as the player is able to lose them after taking damage and then recollect them.

The 20 Rings can appear as a power-up contained in an Item Box, UFO, or Item Panel. It has also appeared as a floating golden Ring separate from containers that is slightly larger than regular Rings and has the number "20" in its center. Item Boxes containing 20 Rings display an icon depicting a Ring with the number "20" written in the display. Like other Item Boxes, 20 Rings Item Boxes can be hidden behind walls, palm trees or in other places. 20 Rings that appear as large floating Rings are likewise obtained upon simply touching them, as there is no Item Box in-between them and the player. However, they cannot be targeted by attacks like the Homing Attack, unlike 20 Rings in Item Boxes. When collecting an Item Box-less 20 Rings, a unique sound effect is played compared to the regular chime exhibited by Rings.

In some cases, the 20 Rings can appear in groups to be picked up.

An early version of the 20 Rings appeared in Sonic the Hedgehog CD. In this game, it is referred to as the Super Ring[3] (スペシャルリング[4], Supesharu Ringu?, lit. "Special Ring") (not to be confused with the item of the same name in the game's Rounds), and is identified with the icon of a single Ring.

In Sonic the Hedgehog CD, the Super Ring only appears in the Special Stages. In these levels, it can be obtained whenever the player destroys a specific purple UFO. In addition, the Super Rings exhibit a special ability in gameplay: for each successive Super Ring the player obtains in a row from UFOs, the amount of Rings this power grants will be doubled. This means that if the player, for example, breaks three UFOs in a row, and each of them hold a Super Ring, then the player will first receive twenty, then forty, and finally eighty Rings. However, obtaining after other power-up during such a chain will reset the Ring amount the player receives.

In Sonic R, another early version of the 20 Rings appeared. In this game, it is referred to as Numbered Item Panel[5] (ビッグ20リング[6], Biggu 20 Ringu?, lit. "Big 20 Ring") and can be obtained at random when touching one of the Item Panels that lie scattered across the racing courses.

In Sonic Adventure 2 and its enhanced port Sonic Adventure 2: Battle, the Ring power-up is referred to as 20 Rings[1] (20リング[2], 20 Ringu?, lit. "20 Ring"). In these games, it is exclusively an Item Box item. The Item Boxes that contain the 20 Rings in this game hold an icon that shows a single Ring with the number "20" written in the lower left corner.

In the Wii/PlayStation 2 version of Sonic Unleashed, the 20 Rings makes another appearance. In this game, it is exclusively a floating ring without an Item Box. 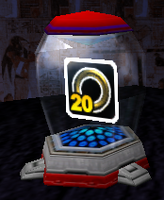 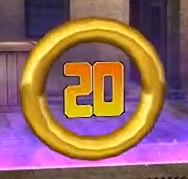