'90s Boulevard is a track in Sonic Riders: Zero Gravity. It appears to be based on the vibrant days of the 1990s, and it takes place during the night, as opposed to '80s Boulevard. The track also makes references to past Sega video game franchieses, such as NiGHTS and Samba da Amigo.

The track starts off in again a location looking somewhat like Times Square, New York, as '80s Boulevard started off in such a way. There is a split that divides the street into two lanes, the one to the right leading to a ramp near a NiGHTS billboard used as a wall-route shortcut, and the other leading to a grassy area with police cars. If one chooses a Gear with grinding or air riding capabilities, then this may be the path to choose. But if a Bike or Wheel user chooses to go right before the split into two lanes, then the character will enter through an alley filled with trash cans, which can be used to replenish Gravity Points. The path will then lead to a 100-Ring Capsule, following a ride up a building. After the player passes the building, there is a hall in which the player can change gravity to land on it. If one chooses not to take this path, however, then the player may use the bottom route to either ride a grind rail or use the ramp and take a dash panel-filled area. The path with the grind rail leads to a billboard with an image of the game series, House of the Dead. Both paths use dash panels that lead to a ramp, which leads down to the start/finish line. If one has enough gravity points, however, then they may use the billboards to conduct a meteor burst, allowing for faster transportation. 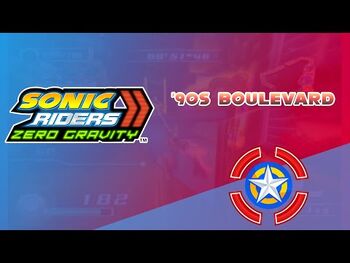