Race amid cars and rails in the lawless city born of the black hole's wake.

80s Boulevard is an unlockable track in Sonic Riders: Zero Gravity. It takes place in a 1980's busy, bustling city covered in references to various Sega franchises around that period and their successors.

The track starts in a street whose design is similar to Times Square in New York. As the player progresses throughout the course, the track then branches into a four-way crossing crowded with buses (which can be used to induce Meteor Bursts while using Gravity Dive). It then transitions to a subway station where one can either take the opportunity to ride on top of a subway train or take the stairs, where Grind Sections are located.

There are many references to Sega's various game franchises and even Sega itself, which include:

The track also includes references to consoles themselves, which include: 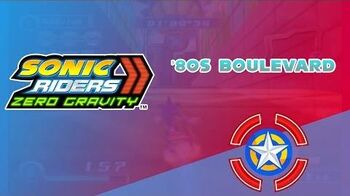