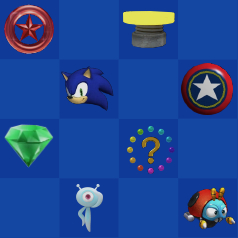 This has been getting sparse attention for a while and I almost forgot the discussion was a thing.

I'm still thinking about a possible future for Sonic on my own, but this discussion has literally been at the back of my mind, and my ideas are a little bit jumbled.

I think i gave an in depth idea earlier here, but... I don't remember. Also I don't think I got much farther, really.

There's too much in my head for multiple game series and such.

(edited by Billyblue98)
A reply to Billyblue98
0
Mystic Monkey wrote:
With Sonic Booms target of audience and demograph, I wouldn't be suprise if Sonic Boom end up that corny.

So, my "Sonic Shuffle: Superstars" idea, is it a good one? I'm well aware of how unpopular Sonic Shuffle was but I can imagine my idea be popular in japanese arcades. Especially arcade machines that are amiibo compatable.

For example in Arcade Mode, there can be 8+ playable characters to choose from. Sonic, Tails, Knuckles, Amy, Nights, Amigo, Ulala and Billy Hatcher. Seems like an inconspicuous selection, but if someone brought one of these with them and place it on the arcade machines where it's data can be recognisable, Bayonetta would be temporarily unlocked for that player to play as.

The home console version can simply have Sega characters unlocked when more of story mode is played or certain minigame challenges are met.

It sounds good, but to be honest, when you said this would mostly be Sonic Shuffle, I kind of zoned out and just skimmed through it.

(edited by Billyblue98)
A reply to Billyblue98
0
Order of the Command Block wrote:

Order of the Command Block wrote: Since you guys talked too much, I skipped three quarters of this discussion, but I have come up for an idea for a Sonic game, as strange as it may be.

The intro starts off with Sonic, Tails, and Knuckles (Because I feel like Knuckles should be there) fighting a large robot while Eggman flies around on his little floaty...sphere... thing.. whatever it is he flies on in Sonic Boom. The three friends joke around with one another while dealing blows to the robot, as Eggman shouts at them to stop breaking the robot, as it was very expensive. Sonic looks at Eggman, then promptly spin-dashes Eggman's robot's arm off. Knuckles says he can do better, and punches the other arm off. Eggman shouts a them, then presses a button, saying that this was a feature he hadn't tested but had to do it. The arm-less robot sends out an electric shockwave, knocking back Sonic and friends, then the center (a blue gem protected by a thin sheet of metal) glows and fires a large laser at the nearest target, Tails. Sonic grabs Tails and pulls him out of the way, but the laser strikes the ground and Sonic tosses tails over to where Knuckles is as the area around him explodes in a pale red electrical sphere. Eggman laughs, saying he can do what he has to now, flies off with his robot as Knuckles and Tails watch as the sphere implodes on itself, causing Sonic (who was inside the sphere at the time) to fall onto the ground, knocked out. Tail and Knuckles run over to Sonic, and confirm he's alive when they se ehim breathing, but injured. A bit of time passes until Sonic wakes up, rubbing his head and asking what happened. Tails happily exclaims Sonic is OK, but upon seeing Sonic's confusion, proceeds to ask if Sonic really is OK. Sonic pauses for a moment, then asks who Sonic is and who they are. Knuckles shares a worried look with Tails, then Tails quickly pieces together that the laser must've either wiped Sonic's memory, or the blow gave Sonic amnesia. Knuckles points out Eggman obviously was happy Sonic was hit instead of Tails, and Tails nods, saying that now it was obvious Eggman intended for the person who got hit to lose their memory. Sonic, still extremely confused, asks the two who they are. Knuckles tries to have a little fun by saying he's Sonic's master and Sonic does whatever he asks, but Tails butts in and tells Knuckles to cut it out, since it's not funny. Knuckles grudgingly admits he lied and tells Sonic they're just friends, then quickly adds Knuckles beats Sonic at a lot of things, but this time Tails just groans instead of insisting Knuckles tell the truth.

The rest of the game would be up to the developers.

It sounds more like a story idea for an episode of Sonic Boom than for a game.
I bet SEGA can make both work.

Yeah, I can see it happening.

Like, at first I was thinking "Sonic Boom" but then things got more interesting.

(edited by Billyblue98)
A reply to Billyblue98
0
Dr. Eggman rox 2 wrote:
Megalodon Commando wrote:
A first person shooter wouldn't be a bad idea either.
I could see it, like an E-123 Omega game.

I can't really see that happening, to be honest. More the first person part. Guns are A-okay with me.

Though, I don't see that many of the already established characters actually using guns, so there is that.

Main Series or more closely related to main series in terms of gameplay and story is what I meant.

I hear a big difference.

And I prefer the current one.

Shadow doesn't have to end up with Amy for Silver to be his descendent.

And just because others think Silver is related to them doesn't mean he has to be.

Most of it was easy.

It was Shadow that was the hard part.

On my side, after my last comment I have thought of jack all.

How about... Eggman uses his robots to disrupt the flow of data around the world, this plot being disguised as randome attacks that make Eggman look desperate. The data being disrupted is masked by fake data that world leaders think just needs to be fixed. And Eggman's real plan is to manipulate the data and send it back to each nation to make all of their tech useless so he can just march in with his robots and take over.

And while Sonic, Tails, and Big, are dealing with this the old fashioned way, with some extra help along the way, Eggman has robots out collecting the Emeralds as a last resort. They succeed in stealing the Master Emerald while a decoy force distracts Knuckles. Rouge finds out about this and tries to take it for herself, but the robots end up dropping it off of a train and it scatters and the pieces drift off in the ocean, with Knuckles and Rouge trying to find the pieces.

Meanwhile, Shadow tasks himself with destroying some of Eggman's key machines for his plan. Shadow runs into the Chaotix, and they discover what Eggman's goal really is. As they are all getting ready to leave, Shadow runs back in to mess with outgoing reports to Eggman, as well as send a little "treat". He then activates the self destruct switch and heads for the next machine he has targeted, with the Chaotix heading out to tell Sonic about Eggman's plan.

If it is a rule, change it.

For reasons mentioned in the thread already.

I think he means that, since on the other thread, Fang the Sniper is mentioned to have a possibility of being a treasure hunter, Beren would like to see Fang go through dungeons for treasure.

I personally see a possibility, but other than asthetically being a dungeon, nothing else Zelda should be incorporated in the levels themselves.

(edited by Billyblue98)
A reply to Billyblue98
0
Observer Supreme wrote:
It's not a game for the iPhone. I meant that I wrote my idea last night on the iPhone. Had to make my presentation short because of errands.

All is well in the world. Well... not all. But something is.

I'd like to see Nack, Mightty, and Ray come back.

Don't really care about Bark or Bean, but coming back with Nack would be pretty cool.

This "Sonic Hunters" game has a pretty interesting story.

I've seen a video talking about how an iPhone could handle at least a Sonic Heroes kind of story, but I don't think any specifics were gone into about anything beyond that. And Sonic Hunters seems to go beyond most Sonic games in story, at least in my perspective.

However, from what I've seen of practically any mobile game, including Sonic Runners, is that the gameplay takes a serious hit, or is just plain boring. I don't understand how anyone can spend more than ten minutes on them.

And I'm just opposed to the idea in general. It's kind of dumb. Phones do enough as is, and I still say that's too much. Leave games to consoles and handhelds. Cramming so much into one device is not the way to go.

I just looked at "iPhone" and stopped there.

I'll take an actual look at what else is written, but my stance is pretty much set in stone already.

GODDAMN IT! I WAS SIGNED OUT AGAIN!!!!

Anyway, I said I was talking about my comment when I said "That goes off topic."

You were trying to end the conversation. Which would allow this thread to go back on topic.